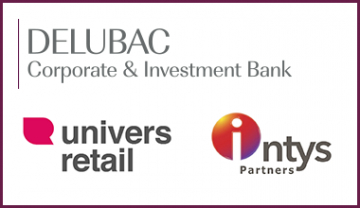 Banque Delubac & Cie supports the founder and majority shareholder of Univers Retail, a specialist in management consulting and operational strategy, in the sale of their company to the Belgian consulting group Intys

This acquisition aims to consolidate Intys's presence in France and fits perfectly with its development strategy in Europe. It also enables Intys to strengthen its position in the areas of Distribution and Retail.

Based in Brussels, Intys customers include 80 large companies and leading institutions in Belgium, Luxembourg and France. In 2019 the Group realised a turnover of €35 million with 360 employees.

Created in 2003 by Jean-Manuel Urvoy and based in the Paris and Lille regions, Univers Retail is an independent management and operational strategy consulting company specialising in the BtoB and BtoC distribution and retail sector. They support major brands, from the definition of their strategy to its operational implementation. With more than 60 employees, Univers Retail achieved around 9 million euros in turnover 2019.

"This transaction allows Univers Retail to accelerate its development in both France and in Europe and underlines our ambition: to become one of the industry leaders. I appreciated the quality of our discussions with Intys operational management and the common values that drive us. The appointment of Cyril BESSE, Univers Retail Senior Partner since 2015, as President of Univers Retail is testament to the success of this transaction and I wish Cyril every success", explains Jean-Manuel Urvoy, founder of Univers Retail.

"We were very happy to advise Mr. Jean-Manuel Urvoy, founder and majority shareholder of Univers Retail on the sale of his company to the Intys Group. This transaction is the result of the sales process which we led and during which we received several buyout offers from industry and investment funds. Our client's preferred choice was Intys Group, which seemed to him to be the buyer most able to pursue the growth and development of the company in France and in Europe, in line with the vision and values of the current management", eexplains Mickaël Hazout, Managing Director, Corporate & Investment Bank, Banque Delubac & Cie.

As part of this transaction, Banque Delubac & Cie advised and successfully supported the founder and majority shareholder in the preparation of the sale of Univers Retail, the search for potential buyers, both in France and in Europe, up until final negotiations.

Published in Press release
Tagged under
back to top